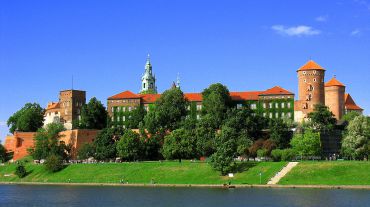 The castle is situated on the bank of the Vistula River in the Polish city of Krakow. For about a millennium Wawel castle rises above the Vistula River. Throughout its history the castle has survived many wars, destruction, fires and reconstructions. In the late 10th century Wawel Castle was the center of political and spiritual power of the country.

To date, the main attraction of Poland. Walking along the paved path, you will be taken directly to the main gate of the castle. There is a monument to Tadeusz Kosciuszko - the leader of the rebellion in 1794. The main square is the Wawel Cathedral. In it the coronation of the Polish monarchs. Near the altar are stored sarcophagi and tomb. On the tower of the cathedral mounted a huge bell named Sigismund - the largest in Poland. It is impossible to ignore the chapel of King Sigmund - a real masterpiece of art. Through an arch in the wall of the castle you will find yourself in the Wawel royal court. Here you can see the oldest building in Krakow - the rotunda of the Blessed Virgin Mary. Walking through the royal apartments, you will plunge into the atmosphere of the Renaissance.