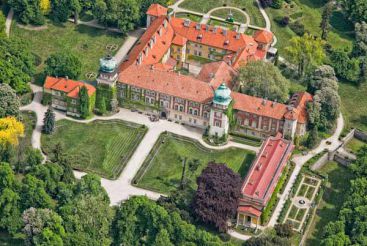 Łańcut Castle is a unique palace and garden complex, which is considered a treasure of the Polish history and culture.

The construction of the castle started in the early 17th century by Prince Stanislaw Lubomirski. The castle was surrounded by a beautiful Italian garden with a magnificent rosary. During World War II, the castle became the headquarters of the German army and the residence of German officers.

In 2005, Łańcut Castle acquired the status of the national historic and cultural monument. Its luxurious rooms are decorated with rare artworks. The palace is currently a museum particularly known for its interesting collection of historic carriages and one of the largest libraries in Poland.

Łańcut Castle is easily accessed on foot or by public transportation running across the city center. The castle is located in the heart of Łańcut.