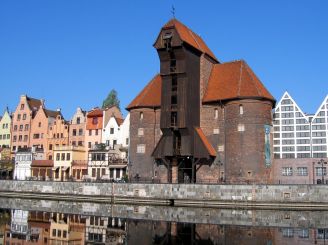 Hallmark of the Polish city of Gdansk are the historic gates which served lookout tower and harbor cranes. This gate-valve.
Unlikely that these gates would be remarkable if it were not complicated mechanical design, which was conceived and created in the 14th century. In those days she operates with four people who manually twisted two large drum located inside the faucet. Gates served lift for ship masts, and allowed to inspect the neighborhood Motława River.
Port crane has become one of the main attractions of Gdansk, not only, but also the whole of Poland. In addition, they were portrayed on coins, which were issued in 1932 in the Free City of Danzig.
Access to specified attractions on city buses number 110 and 210.