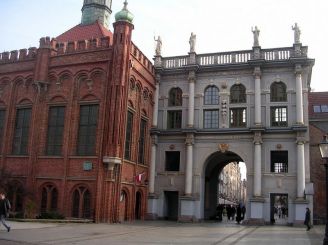 Golden Gate is located in the center of Gdansk, on the historic street Długa. This architectural structure made ​​famous city in the 17th century. Gates considered a true symbol of Gdansk and the personification of human virtues: freedom, peace, love for others, happiness and glory.
On the east and west sides of the gate decorated with allegorical sculptures and inscriptions in Latin. The chief architect of the gate - Abraham van der Block.
The gate was destroyed during the Second World War, but were later fully restored.
Today, the Golden Gate are a popular tourist attraction not only of Gdansk, but the whole of Poland.
To get to the Golden Gate can be on any public transport passing through the center of Gdansk.